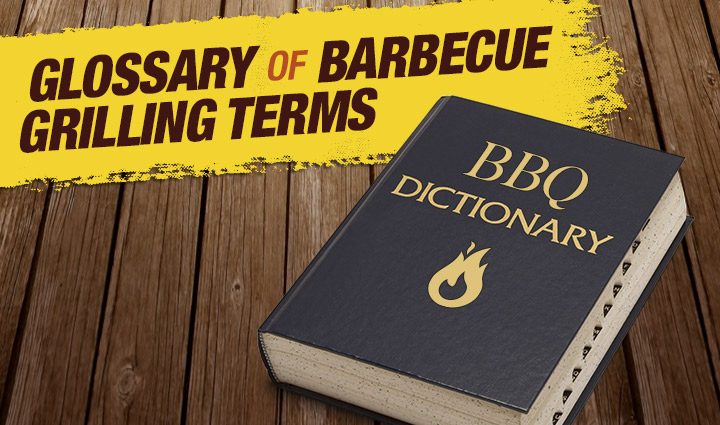 Here is a glossary list of common BBQ terminology to help you get familiar with the grilling lingo used throughout our website. Or learn these terms so you won’t feel left out when hanging out with Pitmasters.

Bark – The dark outer layer of crust created by spice rub on meat that is cooked over low and slow heat. The more sugar you have in the rub, the darker the color of the bark will be. The type of wood you smoke with can also affect the color. Also commonly referred to as “the Crust.”

Basting Brush – A barbecue grilling accessory used to apply sauces, marinades, or oil over food that is being prepared or cooked on the barbecue grill.

Beer Can Chicken – A method of roasting a chicken where a beer or soda can is inserted into the whole chicken and roasted upright on the grill. The beer or soda can is filled with liquid such as beer or soda, as well as herbs and spices. The flavors of the liquid and the spices will infuse the chicken as it cooks. Shop for beer can chicken roasters. 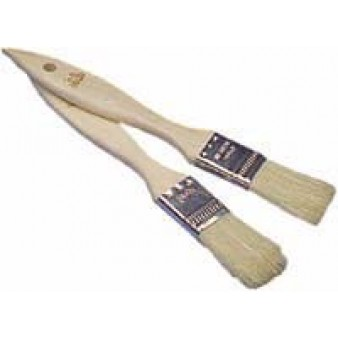 Briquette – A type of charcoal created by compacting combustibles into a block. They burn slow and steady and provide great flavoring.

BTU (British Thermal Units) – A measurement of the energy required to raise the temperature of one pound of water one degree Fahrenheit. On a grill, it is the measurement of the total heat output from all the grill’s burners within one hour.

Chimney Starter – A metal cylinder device used to light charcoal quickly by using newspaper or other fuel sources. It is also commonly referred to as just “Chimney.” Shop for a chimney starter.

Direct Heat Grilling – A cooking method where there is nothing between the food and the heat source. Refer to our direct vs indirect grilling methods article to learn how to set up direct grilling zones on your barbecue grill.

Drip Pan – A foil or metal pan that is used to catch juices from food cooking on the cooking grate. The drip pan prevents these food juices from dripping onto the burners or charcoal fire and helps prevent flare-ups. It is also used when grilling indirectly.

Fat Cap – The layer of fat between the skin and flesh of the meat you’re grilling.

Flare-Ups – Large flames caused by fat and juices from the food dripping onto the grill’s hot charcoal or burners.

Grill Topper – A pan with holes or slots in it that is used to grill small or thin items such as cherry tomatoes, shrimp, or asparagus, that might otherwise fall through the cooking grates. It can also be referred to as “Grid Topper.” Shop grill toppers.

Indirect Heat Grilling – A cooking method where the food is not placed directly over the heat source so that it roasts with the convection flow of the hot air. Refer to our direct vs indirect grilling methods article to learn how to set up indirect grilling zones on your barbecue grill. 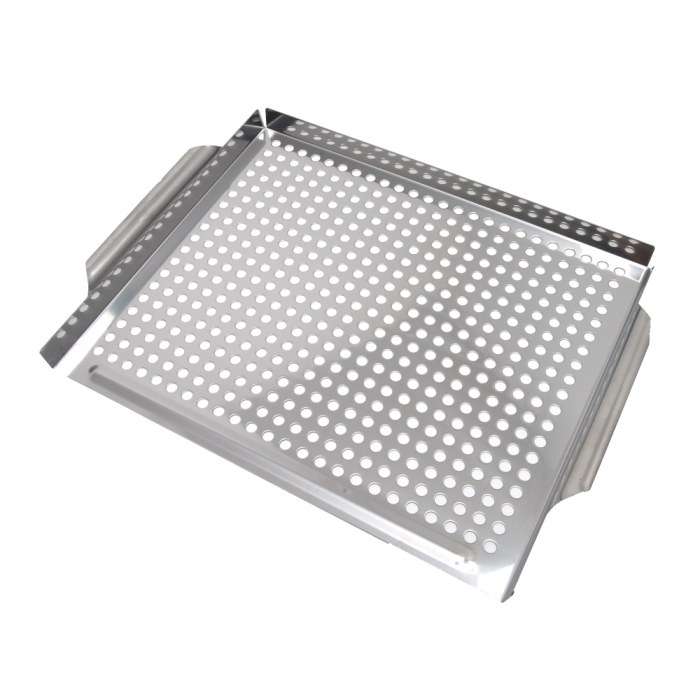 Lid Prop – A tool that allows you to hold the lid of your grill slightly open at various heights, allowing for finer temperature control, particularly during a long cook. Shop for a lid prop.

Lump Charcoal – Carbonized wood that is used to fuel and heat charcoal barbecue grills. Lump charcoal contains no added fillers like clay or other additives and binders. It burns hotter, is cleaner, and has fewer ash briquettes. Also commonly referred to as just “Lump.”

Marinade – A flavored liquid that is infused into the meat over a period of time before it is grilled. Marinades are typically made using an acidic liquid such as wine or vinegar, as well as oil, herbs, and spices. They add flavor and also tenderize the meat.

Meat Claws – A barbecue grilling accessory used to shred large cuts of meat after it is grilled. They are usually used to shred pork shoulder to make pulled pork. Can also be referred to as “Bear Paws” or “Wolf Claws.”

Mop Sauce – A thin vinegar-based sauce that is brushed over the meat while it is being grilled to add moisture and prevent meat from drying out.

Pitmaster – An experienced barbecue cook who is skilled at barbecue grilling. You can also call them “Pit Boss.”

Plank – A piece of hardwood that is used to hold food while it is being grilled over a direct heat source. It is usually made from untreated cedar wood and is often used to cook salmon or other types of fish. When the food is grilled over the wood, it infuses with some of the plank’s natural flavors.

Rest – A period of time in which grilled meat is set aside for 5 to 10 minutes before cutting into it. Resting allows the juices to be absorbed back into the meat and prevents the meat’s juices from running out when cut, resulting in an unappetizing, dry piece of meat.Rotisserie – An electric motor-driven spit that allows you to slowly roast large cuts of meat, whole chickens, or whole fish over a gas or charcoal grill. Shop for BBQ grill rotisseries.

Rub – A combination of herbs, spices, salt, and sugar that is applied to the meat before it is smoked, roasted, or grilled. Shop for spices and rubs. 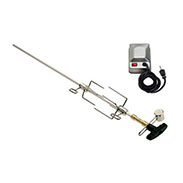 Sear – Creating a flavorful crust (caramelized crust) on meat by quickly grilling it over high heat.

Shiner – A rack of ribs that is trimmed too close so that the bones are exposed. The bones will appear as if it is “shining” through the meat. Avoid buying racks of ribs with a “shiner” since the bones might fall apart when grilled.

Skewer – A thin piece of wood or metal used to hold pieces of meat and/or vegetables together while they are grilling. Alternatively, you can use rosemary sprigs to make rosemary sprig skewers to infuse your kebabs with a rosemary flavor.

Shish Kebab – Pieces of meat and/or vegetables held together on a skewer. It is also commonly referred to as just “kebab.” 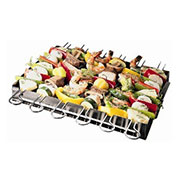 Smoking – A method of cooking food by using smoke from burning wood. 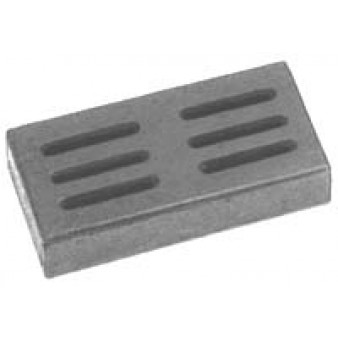 Tongs – An accessory used to pick up and move food.

Shop for replacement grill parts and BBQ accessories on GrillSpot.com. 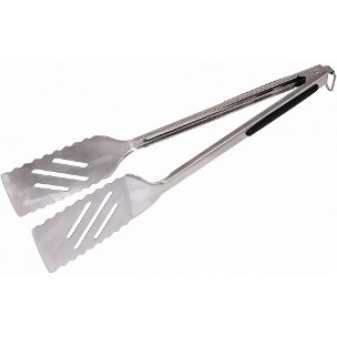 Get the latest updates as soon as they are published in your favourite RSS feed reader.

Have a great recipe,
BBQ tip or story?